Grilled cheese has been a favorite among children since it was first made in the 1920’s. Later, during the Depression era, it became a household staple when sliced bread and processed cheese were introduced as more affordable grocery items. Since the beginning, grilled cheese has been considered one of America’s most popular comfort foods.

In more recent years, the basic preparation of a grilled cheese has evolved to include more than just the original American cheese. You can grill everything from brie to feta on your sandwich. You can also throw on a whole host of toppings that perfectly complement your choice of cheese. Endless experiments in grilled cheese are being served in restaurants and homes all across the country today.

Whether you remember enjoying a grilled cheese sandwich as a child or maybe it was the first thing you learned to cook, there’s no mistaking the comforting power of warm toasted bread and smooth melting cheese. No matter what fancy fixings are being added to it today, there’s still nothing like a simple grilled cheese sandwich.

Read more at CitySocial.com or pick up a free copy coming soon to stands near you!

Boil the pasta for about 5 minutes, or until al dente, then drain. Melt 2 tablespoons butter in a heavy sauce pan or Dutch oven. Melt in the cream cheese and stir in the cream. Then melt in the shredded cheddar. Stir in the seasonings, pepper and adobo. Fold in the pasta and keep warm.

Heat a large griddle or flat top to about 300 degrees Fahrenheit. Butter four slices of toast and place on the griddle, butter side down. Spoon macaroni on top of each slice until covered. Top with slices of avocado. Butter the remaining slices of toast and place them on the sandwiches butter side up. Gently turn the sandwiches to brown. Heat just until the bread is lightly toasted and golden brown on both sides. Serve warm. Makes four sandwiches.

Heat a large skillet or griddle to about 300 degrees Fahrenheit. Toss the goat cheese and diced strawberries together in a small bowl. Butter the bottom of both croissants. Place the croissants down on the heated surface. Spoon half the strawberry and cheese mixture onto each bottom half of the croissant. Drizzle the balsamic glaze over each sandwich. Roll the basil leaves together, cut the basil into ribbons with kitchen shears then sprinkle on top of the sandwiches. Butter the top half of the croissants and place them onto of the cheese, butter side up. Gently flip the sandwiches to brown the top side. Heat just until the bread is lightly toasted and golden brown and until the cheese starts to soften. Serve warm. Makes two sandwiches. 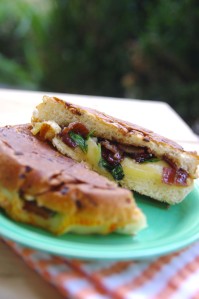 Heat a griddle to about 300 degrees Fahrenheit. Cut the bacon into small pieces and start browning with the garlic in a small skillet. Stir in the bourbon, jelly, brown sugar and vinegar. Cook together until the bacon is done. Butter the bottom of the roll and place it on the griddle, butter side down. Cover each bun with cheese slices. Wilt the spinach on the griddle and place on top of the cheese. Using a slotted spoon, spoon the bacon chutney over the spinach. Butter the top of the bun and place it over the bacon, butter side up. Gently flip the sandwich over to brown the top. Heat just until the bread is lightly toasted and the cheese starts to melt. Serve warm. Makes two sandwiches.

Sautee the onions and pecans in 1 tablespoon of butter over medium-low heat for 15 minutes or until the onions are brown and start to smell sweet. Remove from heat. Heat a large skillet, griddle or flat top to about 300 degrees Fahrenheit. Butter the bottom of the wheat rolls with half the remaining butter. Remove the rind from the brie and slice it. Pile the brie onto the bottom rolls. Spoon the onion and pecan mixture over the cheese on each sandwich. Spread one tablespoon of fig jam over each of the insides of the top buns. Place the top bun onto the sandwiches and butter the outside of the top bun. Turn gently to toast the top side of the sandwich and heat just until the bread is golden brown and until the cheese softens. Serve warm. Makes two sandwiches.